Gary Brueggemann is a lifelong resident of the West 7th Street neighborhood and has worked to preserve and share the history of St. Paul, notably the West 7th neighborhood. Gary once taught at Monroe School (much to his joy) before spending over 35 years teaching history at Inver Hills and Century Community Colleges. In 1978 he created the first college accredited course on the History of St. Paul, as well as another course on St. Paul’s oldest neighborhood — Fort Road/West 7th Street. During the past 40 years he has conducted dozens of historical tours of the neighborhood and has written at least 20 local history articles for the West 7th Community Reporter, including one in 1993 that was awarded the “Best Historical Feature” by the Neighborhood Press Association. He authored the first Fort Road History Calendar Book, co-authored the Centennial History of St. Francis de Sales Parish and co-authored the Centennial History of Saint Mark Lutheran Church. Gary served on the West 7th/Fort Road Federation Board, Westside/West End Hockey Association board, was a local coach at the Palace Recreation Center, and has been on many, many task groups and advisory bodies where “his deep knowledge of local history helped bring a needed perspective.” Gary is also a current member of the West End Boy’s Club.

Thomas Schroeder and his wife Ann first moved to the West 7th neighborhood in 1992 and he’s been making an impact ever since. While restoring his own house on McBoal Street, Tom incorporated the Uppertown Preservation League with a group of dedicated neighbors, helped raise seed money to acquire and stabilize other threatened properties in the neighborhood, and worked with volunteers, developers, and the City to save properties that were slated for demolition. Although Tom’s legal practice at Faegre Baker Daniels focuses on nonprofits and health care law, over his 27 year legal career he has repeatedly served as a pro bono attorney to save numerous historic buildings from demolition, including most recently the 1872 Hope Fire Engine House No. 3 on Leech Street. Due in part to Tom’s work ,The Hope will re-open to the community in 2019. In 2008, Tom noticed a little limestone building on Smith Avenue that had gone vacant and was headed towards demolition. Tom bought the building and then discovered that it is St. Paul’s only surviving Civil War era saloon. After nine years of restoration work, Tom opened Waldmann Brewery, a restored 1857 German lager house and neighborhood gathering place. Tom is passionate about saving the history of the neighborhood.

United Hospital, part of Allina Health is the recipient of the 2018 Keystone Good Neighbor Award. The award is presented annually to an organization that has shown a commitment to supporting Keystone and the people in our community.

United Hospital and Allina Health have been supporting the programs of Keystone Community Services for many years. Allina Health has been a long-time funder of Keystone, offering steadfast financial support for our programs. In recent years, United Hospital has shared the skills of their Facilities Maintenance crew by doing mass construction projects during one-day volunteer events. In 2017, the team converted office space into Keystone’s Best Buy Teen Tech Center which gives young people access to technology, offering them the opportunity to develop passions and practice skills that will prepare them for post-secondary education and employment. In 2018, the team transformed unused space at the Merriam Park Community Center to make them comfortable for use. In total these in-kind contributions of time have saved Keystone more than $25,000 in labor costs. Keystone is honored to partner with United Hospital and Allina Health. 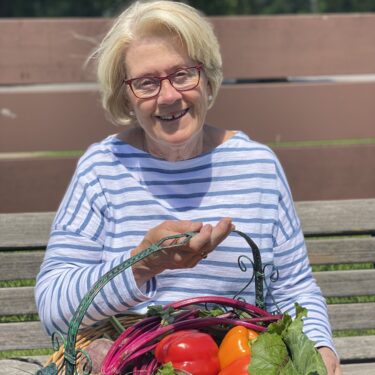 Nancy knows the power of volunteering and giving back.